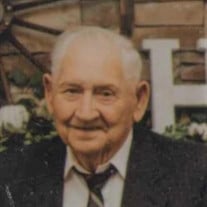 Funeral service for William “Billy” Frank Westbrook, 91, will be Friday, March 19, 2021 at 2:00 p.m. at Thompson Funeral Home with Mr. Gary McCurdy officiating. Burial will follow at Piedmont Memory Gardens. The family will receive friends Friday from 12 -2 p.m. Mr. Westbrook passed away Tuesday, March 16, 2021 at Gadsden Regional Medical Center. He is survived by his loving wife of 69 years, Carolyn Westbrook of Spring Garden; son, Michael Westbrook (Teresa) of Spring Garden; daughter, Ann Townley (Allen) of Trussville; four grandchildren, Hannah Diggs (Spencer) of Hokes Bluff, William S. Westbrook of Fort Hood, Texas, Rachel Townley and Lauren Townley both of Birmingham; sister-in-law, Patricia Revel (Dan) of Griffin, Arizona; and several nieces and nephews. Pallbearers and Honorary Pallbearers will be members of the Spring Garden Volunteer Fire Department. Mr. Westbrook was a longtime resident of Spring Garden and was of the Methodist faith. He was a member and served as the first fire chief of the Spring Garden Volunteer Fire Department. Mr. Westbrook was a U. S. Army veteran where he served in the 131st Tank Division at Fort Knox, Kentucky. He was one of ten men chosen to go to New York to instruct the West Point cadets in the use of tanks. He enjoyed raising and giving away corn and riding his bicycle. He was preceded in death by his parents, Lester and Grace Westbrook; and his sister, Charlotte Vickers. Flowers may be sent or memorial contributions may be made to the Spring Garden Volunteer Fire Department, P.O.Box 38, Spring Garden, AL 36275 or the Spring Garden School Foundation, P.O.Box 83, Spring Garden, AL 36275 .

The family of William "Billy" Frank Westbrook created this Life Tributes page to make it easy to share your memories.

Send flowers to the Westbrook family.