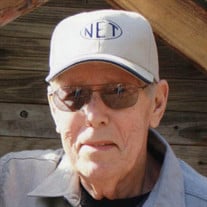 Walter Westbrook, 76, passed away peacefully in his home on January 20, 2021 surrounded by his family after a courageous eight-year battle with cancer. Funeral service will be Friday, January 22, 2021 at 2:00 p.m. at Thompson Funeral Home with the Rev. Michael Ingram officiating. Burial will follow at Piedmont Memory Gardens. The family will receive friends one hour prior to the service at the funeral home. Walter was born on August 18, 1944 in Roy Webb. He attended Jacksonville State University for both his Bachelor of Science and Master of Business Administration degrees. He served in the United States Army from 1967-1971. After being discharged from the Army, he lived the remainder of his life in Piedmont, Alabama where he was widely loved and adored for his wit, dry sense of humor, and his love for life. He retired from his career in sales at M&H Valve in 1998. He worked hard at Sunshine Nursery, the family business, where he taught his daughters to have the same drive, determination, and work ethic that he had. Walter taught at both Gadsden State Community College and St. Clair Correctional Facility, where he especially loved the prisoners he had the joy of teaching as students. He was passionate about his garden and generously gave much of the food he grew to his family and friends. He loved and doted on his family as they did him. He was a proud husband, father, and grandfather. He was a lot of people’s favorite person, especially at Jack’s, where he had been a regular customer for the past several years. No one fought harder against cancer. He was strong and determined in all of his ventures. He was a great man who was good to all he knew and loved. He is survived by his wife, Janis Westbrook; two daughters, Tonya Westbrook Goss (Brian) of Asheville, NC and Tracy Greeson (Kevin); one granddaughter, Ivy Gail Franklin of Nashville, TN; and one step grandson, Austin Goss of Piedmont, AL. Pallbearers will be Marty Smith, Scotty Grimes, Scooter Franklin, George Barnwell, Jim Thompson, and Wesley Thompson. Honorary Pallbearers will be Kevin Greeson, Brian Goss, and Kenneth “Tiny” Martin. Walter was preceded in death by his parents, Fanton and Alpha Sulta “Sissy” Westbrook; four siblings, Pauline Grimes, Pelham Westbrook, James Westbrook, and infant brother, Vann Westbrook. In lieu of flowers, donations can be made to Venecia’s Foundation, 108 N. Center Avenue, Piedmont, AL 36272, St. Jude’s Children’s Research Hospital, 501 St. Jude Place, Memphis, TN 38105-1905, MD Anderson Center in Houston, TX, where he received most of his cancer treatment, The University of Texas MD Anderson Cancer Center, P.O. Box 4486, Houston, Texas 77210-4486.

Walter Westbrook, 76, passed away peacefully in his home on January 20, 2021 surrounded by his family after a courageous eight-year battle with cancer. Funeral service will be Friday, January 22, 2021 at 2:00 p.m. at Thompson Funeral Home with... View Obituary & Service Information

The family of Walter Westbrook created this Life Tributes page to make it easy to share your memories.

Walter Westbrook, 76, passed away peacefully in his home on January...

Send flowers to the Westbrook family.