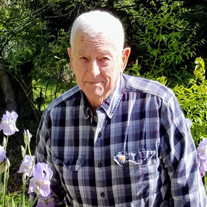 Mr. Walter Ingram, 82, of Piedmont, AL. passed on to his heavenly home on Thursday, July 19, 2018 surrounded by family. Services will be on Monday, July 23, 2018, at 2pm at Thompson Funeral Home with the Rev. Blane Tidwell officiating. Burial will follow at Highland Cemetery. The family will receive friends at the funeral home from noon until time of service. Mr. Ingram was born Wednesday, July 24, 1935, in Etowah County to Berta Nail Ingram and David Doss Ingram. He was born the eighth child at home in the country where he lived his childhood. In March of 1957 he married Martha Jo Acker of Piedmont. He lived the majority of his life in Piedmont where he raised five children. He loved the outdoors, fishing, growing all kinds of things. He raised animals, birds, and fish. He had a very green thumb with the ability to grow most anything…trees, flowers, fruits, prize winning vegetables, and some exotic plants. He owned and operated his own construction company for many years in Georgia. After he retired from it, he did not seem to slow down much for years. He was always busy at something construction or gardening or mostly being boss. He was preceded in death by his wife of 48 years, Martha Jo Acker Ingram, his parents, and several siblings. He is survived by his five children, Sheila (Mike) LeRoy, Gary Randall “Randy” (Rita) Ingram, Teresa Ingram(Tommy Posey), Jonathan (Doris) Ingram, and Jason (April) Ingram; grandchildren, Jennifer Crabb Johnson, Rebecca (Jason) Hanback, Heather (Dustin) Ingram Maddox, Jeremy (Amanda) East, Matthew Ingram, Samuel Ingram, and Reilly Ingram; great-grandchildren, Lauryn Maddox, Dayton Hanback, Brayden East, Noah Johnson, Erin Johnson, and Justin Jacobs; and several siblings. Pallbearers will be sons, son-in-laws and grandsons. Honorary Pallbearers will be granddaughters and great-grandchildren. Special thank you to Amedysis Home Health and Hospice, Dr. Ulrich, and Piedmont Rescue Squad. Flowers may be sent or memorial contributions may be made to St. Jude Children’s Research Hospital, 501 St. Jude Place, Memphis, TN 38105-1905.

Mr. Walter Ingram, 82, of Piedmont, AL. passed on to his heavenly home on Thursday, July 19, 2018 surrounded by family. Services will be on Monday, July 23, 2018, at 2pm at Thompson Funeral Home with the Rev. Blane Tidwell officiating. Burial... View Obituary & Service Information

The family of Walter Ingram created this Life Tributes page to make it easy to share your memories.

Send flowers to the Ingram family.