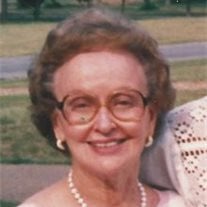 Mrs. Virginia D. Miller, a resident of Atlanta, Georgia but for many years a resident of Piedmont, Alabama, died peacefully in her sleep Wednesday in Atlanta. She was 95 years of age. Her funeral will be held at Piedmont First United Methodist Church in Piedmont, Alabama on Sunday, May 20, at 3:30 P.M. Burial services will follow at Forrest Cemetery in Gadsden, Alabama, where she will be buried next to her husband, the late Charles C. Miller, Jr. of Piedmont. Visitation with the family will be at Thompson Funeral Home, 6340 Old Piedmont-Gadsden Highway in Piedmont, from 4 to 6 P.M. on Saturday, May 19. Born Virginia Dare Doke on April 14, 1917, near Toomsboro, Georgia, she moved with her mother, sister and brother to the Riley community near Irwinton, Georgia after her father died in 1920. Her family moved to Eufaula, Alabama in 1927, where she was an honor student at Eufaula High School. After graduating from Eufaula High in 1935, she attended Georgia State College for Women in Milledgeville, Georgia, where she was a Dean's List student and received a 2-year degree in 1937. She worked in Eufaula for a few years and then in the early 1940's moved to Washington, D.C. to work for the U.S. Department of Navy. Later she worked for Eastern Air Lines in Atlanta until she married Charlie Miller in 1948. The couple moved to Piedmont, Alabama, where they spent the rest of their married life. Both were active in Piedmont First United Methodist Church and in the community. Mr. Miller died in 2002, and Mrs. Miller moved to Atlanta in 2004. Mrs. Miller is survived by her daughter Mary Ann Miller Harris (and her husband Tad) of Nashville; her daughter Nancy Kathryn Miller of Palm Beach, Florida; her son Charles Clifton Miller III (and his wife Pinney) of Atlanta; five grandchildren – Taylor Clifton Harris (and his wife Grace) of San Francisco, California; Laura Ann Harris Penney (and her husband Matt) of Leesburg, Virginia; Miller Franklin Harris (and his wife Margaret) of Nashville; Linden Lee Miller and Doria Coats Miller of Atlanta; and six great-grandchildren – Jordan Virginia Penney and Cyrus James Penney of Leesburg, Virginia; Sophia Dare Harris, William Taylor Harris and Calissa Ann Harris of San Francisco; and Margaret Luck Harris of Nashville. In lieu of flowers, the family requests that donations be made to Piedmont First United Methodist Church.

Mrs. Virginia D. Miller, a resident of Atlanta, Georgia but for many years a resident of Piedmont, Alabama, died peacefully in her sleep Wednesday in Atlanta. She was 95 years of age. Her funeral will be held at Piedmont First United Methodist... View Obituary & Service Information

The family of Mrs. Virginia D. Miller created this Life Tributes page to make it easy to share your memories.

Mrs. Virginia D. Miller, a resident of Atlanta, Georgia but for...

Send flowers to the Miller family.