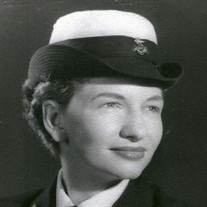 Thelma (T) Mills Joyce, age 91, passed from this life on August 21, 2019, surrounded by her loving family. Thelma was born in Marshall County, Alabama. She is survived by her 5 children, Paul P. Joyce Jr. (Joyce) of San Bruno, CA, Karen A. Joyce of Springfield, OR., Ray S. Joyce of Piedmont, AL, Trudy J. Loy (David) of Piedmont, AL. and John T. Joyce of Piedmont, AL. 7 Grandchildren, Thomas P. Joyce (Akeya), Katie A. Joyce, Paul J. Loy (Crystal), Kara L. Flowers (Larry), Allyce M. Loy (Destin Morrison), Jayme L. Otero (Luis) and Shelby Caputo (Bruno), and 3 great-grandchildren. One brother Rudy A. Mills (Elisabeth) of Pensacola, FL and one sister, Joan E. Rogers (Paul), of Spring Garden, AL. Many special cousins, nieces and nephews and Special friend and caregiver Terry Surrett. Mrs. Joyce enlisted in the U.S. Navy on December 2, 1952 at Birmingham AL. she discharged on December 30, 1958 as YN2 due to pregnancy. At that time if you got pregnant you could not continue to serve. Her WAVES company marched in President Eisenhower’s first inaugural parade. She was stationed in San Diego, CA, Astoria OR, Norfolk, VA where she was social secretary to Admiral Gerald Wright; New Orleans, LA, and Pearl Harbor, HA. While on Boot leave, she and her USN Brother Rudy, recruited on the radio and at several schools. After her marriage, she enjoyed several years in Hawaii and the birth of her children. In 1964 she and the children returned home and she married her husband Paul P. Joyce Sr. in 1966 and moved to Norfolk, VA where they lived until they moved to Piedmont, AL in 1984. She was a member of WAVES National, High School Forty Sixers, loved reading, teaching bible classes and attending Pearl Harbor survivor meetings and trips with her husband. She was known by all for her strong Christian Faith. Mrs. Joyce was preceded in death by her Husband of 46 years, Paul P. Joyce Sr. Her parents John Henry and Nellie Mae Mills (TuTu and PaPa), daughter-in-law Debbie Hess Joyce and grandson James P. Joyce. In memory of Mrs. Joyce the family requests that donations be made to the Piedmont Rescue Squad or The Piedmont Public Library. Special thank you to Dr. Ulrich and the wonderful staff at Piedmont Family Practice, Piedmont Rescue Squad and the staff at Piedmont Health and Rehab. Mrs. Joyce requested no services.

The family of Thelma "T" Mills Joyce created this Life Tributes page to make it easy to share your memories.

Send flowers to the Joyce family.