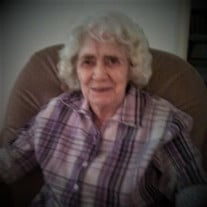 Shirley Ruth Popham, 92, resident of Jacksonville AL and formerly of Louisville KY, passed away peacefully Sunday September 6th, 2020 at Regional Medical Center in Anniston, surrounded by her family. Shirley was born July 16th, 1928 in London, Kentucky, and was the daughter of Jackson S. Onkst and Mary Jeffrey Onkst. She is survived by her brother and caregiver Jeffrey Baxter Onkst; sister-in-law Sharon Johnson Onkst, both of Jacksonville AL; two nieces, Peggy Onkst Knapp of Springdale AR and Tiffany Onkst Mancipinto of Jacksonville AL; two nephews, James B. Onkst of Prospect KY and Bradley E. Onkst of Indianapolis IN, along with a number of great nieces and nephews. Shirley grew up in Pittsburgh Kentucky and later moved to Louisville Ky. She was a member of Farmdale Baptist Church, Daughters of America and the Order Of The Eastern Star Of Kentucky, 1 Queen Esther Chapter No. She started her career at Sears and Roebuck in Louisville, and spent thirty years as a credit manager before retirement. It was while living in Louisville that she met and married the love of her life Harry P. Popham. Both enjoyed traveling and together took many trips across the country, visiting family and friends and often just packing up and traveling to places unknown. She forever cherished the memories of those trips and the memory of her husband. Shirley had a quiet sense of adventure and a passion for dancing and gardening. She was a loving wife, daughter, sister, aunt and friend. Her kindness, love, and nurturing spirit will be missed by all who knew and loved her. Shirley was preceded in death by her beloved husband of forty-three years, Harry P. Popham, stepson Dale A. Popham, brother Jackson Onkst, Jr., nephew Brian Alan Onkst, and parents, Jackson S. and Mary J. Onkst. Due to the threat of Covid, arrangements for a memorial service at Pittsburgh Cemetery, Pittsburg KY will be announced at a later date.

The family of Shirley Ruth Popham created this Life Tributes page to make it easy to share your memories.

Send flowers to the Popham family.