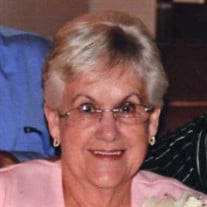 In the evening on Saturday November 14, 2020, Shelby Jean Johnson Anderson let go of this life to enter into the presence of the Lord. She joins there her parents, Gus and Pauline Johnson, her husband Norman Anderson, her youngest son Jim, her brothers and sister Melvin, Paul, Donnie, and Lillian, and many loved aunts, uncles, cousins, in-laws, and friends. Shelby was born on November 8, 1937. She grew up in the Mill Village in Piedmont, Alabama, living just across the street from the Y and its skating rink. She attended Coosa School and a lot of the stories, of which there were many, she told in her lifetime were of the Village, the Y, the school, and the people there. Shelby married Norman on March 5, 1955 at 17 years old, and they shared their lives together until his death on October 16, 2013. They had many adventures together during this time and did it most of the time with a smirk and the ability to make a good story out of whatever came. There was also some heartache, especially with the death of their son, Jim. Shelby struggled somewhat in the time after Norman died, but was helped along by many special people in her life and especially by her son Mark. On her last day in this life she was flashing that big smile from time to time at those around her. Shelby is survived by her son and daughter-in-law, Stan and Cathy Anderson; Her son and daughter-in-law, Mark and Cindy Anderson; Grandchildren: Nick (Samantha) Ellison, Tessa (Brandon) Maddox, Paige (Damon) McDonald, Raen Anderson, and Cory Anderson (Madison Thames); Great Grandchildren: Elana Ellsion, Kyla Ellison, Coleman Maddox, Connor McDonald, and Stella Maddox; her sister, Nadine Hendon; her sister-in-law, Shirley (Joe) Dunaway; Very special friend and partner-in-crime, Doris Acker; and many well-loved nieces and nephews. Pallbearers will be Nick Ellison, Brandon Maddox, Damon McDonald, Cory Anderson, Ritchie Johnson, Steve Johnson, Tony Kirk, and Shane Kirk. She will be missed. Funeral Service for Mrs. Anderson will be Tuesday, November 17, 2020 at 2:00 P.M. at Thompson Funeral Home with the Rev. Debbie Hitchcock and the Rev. Ted Anderson officiating. Burial will follow at Piedmont Memory Gardens. The family will receive friends at the funeral home one hour prior to the service. Flowers will be accepted or memorial contributions may be made to Spring Garden United Methodist Church, PO Box 44, Spring Garden, Alabama, 36275.

In the evening on Saturday November 14, 2020, Shelby Jean Johnson Anderson let go of this life to enter into the presence of the Lord. She joins there her parents, Gus and Pauline Johnson, her husband Norman Anderson, her youngest son Jim, her... View Obituary & Service Information

The family of Shelby Jean Johnson Anderson created this Life Tributes page to make it easy to share your memories.

Send flowers to the Anderson family.