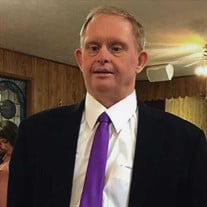 Randall “Randy” Acker Estes, Jr., born August 30th, 1966, passed away on December 9th, 2020. He is preceded in death by his dad, Randall A. Estes, Sr.; and his grandparents, Jesse and Lucille Estes and AJ and Dorothy Carr. He is survived by his mom, Sarah “Bonnie” Estes; sisters, Deborah (Michael) Danielson, and Sandra Biddle; brother, Robert (Stephanie) Estes; and numerous nieces and nephews. Randy was a dedicated, loyal, and active member of Plainview Congregational Holiness Church. He faithfully attended church functions, camp meetings, and youth camps. He enjoyed singing and performing with the youth drama team. During Randy’s time living in Montgomery, he competed in the Special Olympics, worked at the Hanan Center, was an avid bowler, and was a member of the Blue Marlins swim team at the TRC. He attended Sunshine Camp where he considered himself a director, helped make props, and plan the program. Randy had a love for football but more specifically Alabama, JSU, and Piedmont football. Randy touched the lives of many people and always left a smile everywhere he went. He enjoyed spending time with his family, church family, and his friends. The world is a brighter place because of the love Randy showed. He will be missed by so many here on earth, but we have a little peace knowing he is reunited with his dad and singing and performing on a bigger stage. Rest Easy, Randy! A private graveside service will be held for his immediate family with a memorial service being held at a later date to be announced. In lieu of flowers, the family request memorial contributions be made to the Special Olympics, 1133 19th Street NW, 12th Floor, Washington, DC 20036-3604 USA

The family of Randall "Randy" Acker Estes Jr. created this Life Tributes page to make it easy to share your memories.

Send flowers to the Estes family.