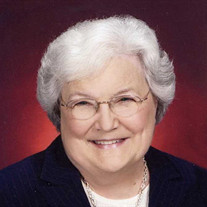 On Wednesday, August 01, 2018 Prudence Hilburn, 82, went home to be with the Lord. She passed away peacefully at Gadsden Regional Medical Center surrounded by her loving family. A celebration of life ceremony will be held on Sunday, August 05, 2018 at the Piedmont Congregational Methodist Church at 3:00 p.m. Visitation will be Saturday, August 04, 2018 from 6:00-8:00 p.m. at Thompson Funeral Home in Piedmont. She was preceded in death by her husband, best friend and biggest supporter, Huey; her ten year old son, Randy; her parents; and six siblings. Left to cherish the memories of a wonderful mother are her daughters, Debra Payne (Ricky), Twila Thornburg (Freddy) and Carol Ogles. She adored her six grandchildren Meagan Carter (Brandon), Jesse Thornburg (Amber), Steven Jones (Britney), Paden Thornburg (Jaree), Emily Ogles and Christi Thornburg. She has seven great grandchildren; one sister-in-law, Ann Canter; and several special nieces and nephews. She was well known as a food writer for both the Anniston Star and the Gadsden Times for close to 30 years. She was a syndicated columnist for over 24 years. She received culinary training in the South of France, where she studied with Julia Child and Simone Beck. She worked on the management staff of the former Peter Kump’s New York Cooking School (now known as The Institute of Culinary Education). She worked with Barbara Kafka Associates in Manhattan, one of the country’s leading restaurant consulting firms. Barbara was the Food Editor of Vogue Magazine and wrote the introduction to Prudence’s A Treasury of Southern Baking cookbook. She worked with and assisted Chef Nicholas Malgieri (former pasty chef at Windows on the World, NYC) at food demos. She was the Southern Media Spokesperson for Pillsbury Company and Domino Sugar, promoting new products. She appeared on numerous local and national television shows including the CBS Morning Show in New York City and featured nationally on a segment of CBS’s “Eye on People.” She was featured on two segments for the Food Network taped at her home in Piedmont. One was for their coverage of the 2003 National Chicken Cooking Contest. She was the author of 12 cookbooks, winner of over 30 cooking awards which included six time finalist in the Pillsbury Bake-Off. She taught cooking classes at Jacksonville State University, in Tuscaloosa, Alabama and several area churches. She was once selected by the Piedmont Jaycees as their Person of the Year. She was honored with a “Prudence Hilburn Day” recognition in Calhoun County and had “Prudence Hilburn Path” in Piedmont named after her. That was the road she used when walking from her childhood home to her family church. Although she was known for her culinary skills, her desire was to be remembered as a good Christian woman. Anyone who ever met her and saw her beautiful smile was well aware of her love for the Lord. She loved teaching her Faith Sunday School Class, singing with her two close friends Dean Smart and Betty Lawler and participating in all the activities at her home church. One of the many highlights of her life was getting to go to the Holy Land and be baptized in the Jordan River. Flowers will be accepted or donations may be made to St. Jude’s Children’s Research Hospital, 501 St. Jude Place, Memphis, TN 38105-1905 or the Piedmont Congregational Methodist Church Building Fund, P.O. Box 583 Piedmont, AL 36272. A special thanks to Cherokee Home Health and Southern Care Hospice for their loving and attentive care.

On Wednesday, August 01, 2018 Prudence Hilburn, 82, went home to be with the Lord. She passed away peacefully at Gadsden Regional Medical Center surrounded by her loving family. A celebration of life ceremony will be held on Sunday, August 05,... View Obituary & Service Information

The family of Prudence Hilburn created this Life Tributes page to make it easy to share your memories.

Send flowers to the Hilburn family.