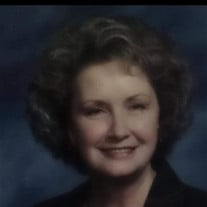 Funeral service for Naoma “Blom” Rainey Reynolds, 74, of Jemison, will be Friday, October 25, 2019 at 1:00 p.m. at Thompson Funeral Home with Dr. Bill Reynolds, Billy Reynolds and the Rev. Allen Foster officiating. Burial will follow at Gnatville Cemetery. The family will receive friends at the funeral home on Thursday, October 24, 2019 from 6 – 8 p.m. Mrs. Reynolds passed away Sunday, October 20, 2019 at her home. She is survived by her husband of 59 years and eight months, Dr. R. B. “Nub” Reynolds of Jemison; four children, Billy Reynolds (Gayla) of Springville, Melissa Tate (Sam) of Jemison, Charlotte Ingram (Mark) of Sumrall, Mississippi and Susan “Tidy” Hill (Todd) of Helena; eleven grandchildren, Niki, Jessie, Dewayne, J.R., Arisha, Rachel, Madison, Savannah, Kelsey, Laken and Halle; twelve ½ great grandchildren; two sisters, Veona “Mink” Law (Kenneth) of Tomson, Georgia and Linda Pittman of Spring Garden; two brothers, L. D. “Ray” Rainey (Helene) of San Clemente, California and Rev. James O. Rainey (Gaynelle) of Centre; and numerous nieces and nephews. Mrs. Reynolds was born in Piedmont where she attended Piedmont City Schools. She and her husband were married on February 26, 1960. After their marriage they lived in various cities in the states of Florida, Mississippi, Alabama and Georgia where she served alongside her husband in the ministry. She was a mighty prayer warrior who loved Jesus and was known to sing with the voice of an angel. Mrs. Reynolds owned and operated a catering business for 20 years and also owned and operated Naoma’s Sunshine Bakery in Petal, Mississippi. She was a Godly woman with a winning personality who cared for everyone she met. She was preceded in death by her parents, Lloyd and Muriel Rainey; one sister, Betty, Simpson; and three brothers, Charles Rainey, Donnie Rainey and Ralph Rainey.

The family of Naoma "Blom" Rainey Reynolds created this Life Tributes page to make it easy to share your memories.

Send flowers to the Reynolds family.