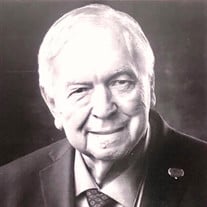 Millard V. Young, Jr. passed away at his home on the afternoon of Monday, July 20, 2020. He was born on September 15, 1934 in Lineville, Alabama to M.V. Young, Sr. and Ruth German Young. In 1941, his family moved to Piedmont, Alabama where his father founded a private-brand service station and farm fuel supply business. Millard graduated from Piedmont High School in 1952 and from Jacksonville State University in 1956. He was known for his affinity for antique cars, and aside from his many Antique Car Show awards, he was an integral advocate for the Antique Auto Tag Law in the State of Alabama. He was a member of the Piedmont Church of Christ, member and past president of Lozahatchee Masonic Lodge No. 97 - of which he was a 50 year member - and member of Zamora Shrine Temple since 1962. Millard married Paula Ann Sanford on August 15, 1953 and together they celebrated 66 years of marriage. He is survived by Ann and their four children: Pam Young, Karen Kisor (Jeff), Vernon Young (Scarlett), and Brian Young (Jennifer). They have eight grandchildren: M.V. Young (Christa), P.J. Hammett Floyd (Steven), A.J. Young (Caitlin), Daniel Hammett (Morgan), Adam Hammett (Emily), Davis Young, Emily Kisor, Hayden Young, and his Australian Shepherd, Deli. He is also survived by his brother Louis Young (Linda) and sister Martha Young Norton, sisters-in-law Jane Sanford Gowens and Carol Sanford, along with several nieces and nephews. He has been cared for by wonderful care givers, for which we are forever grateful. Millard guided his family business, Young Oil, Inc. since March 31, 1969. He served as President of Young Oil, Inc. until becoming CEO in 2002. Since its founding in 1969, Young Oil, Inc. has grown into a local leader in the petroleum industry. Its current operations include the Grub Mart convenience stores and a wholesale division that supplies petroleum products to businesses throughout Alabama. Millard was a leader in our community and proudly served in these various organizations: • Piedmont Chamber of Commerce, Member • Independent Oil Men’s Association of Alabama, President • Farmers and Merchants Bank, Piedmont, Alabama, Director • Piedmont City School Board, Member • Board of Directors of the International House, Jacksonville State University, Member • Foundation Board, Jacksonville State University, Member • Piedmont Booster Club, Member • Model A Restorers Club of Alabama, Member and Co-Founder • Antique Auto Club of America, Member • Piedmont Jaycees, President • Jacksonville State University Alumni Association, Member • Southeastern Independent Oil Men’s Association, President • Society of Independent Gasoline Marketers of America, Member • Industrial Board of the City of Piedmont, Member • 2003 Alumnus of the Year Jacksonville State University • 2012 Piedmont’s Citizen of the Year • 2016 Petroleum and Convenience Marketing Hall of Fame Millard, who was known as O’Pa to many, will be greatly missed and was deeply loved. For those who wish to pay their respects, there will be a visitation at Thompson Funeral Home (Piedmont, AL) on Thursday, July 23 at 5pm. Service to follow. In lieu of flowers, the family asks instead that those who wish to contribute make donations to one of the following: Millard V. and Ruth Young Memorial Scholarship Fund (Jacksonville State University); Piedmont Historical Society; or the Piedmont Church of Christ. In memory of one of their biggest fans and supporters: GO PIEDMONT BULLDOGS and GO GAMECOCKS! As mandated by the State of Alabama health officials, Covid 19 precautions will be enforced. Masks are required and social distancing of six feet will apply.

Millard V. Young, Jr. passed away at his home on the afternoon of Monday, July 20, 2020. He was born on September 15, 1934 in Lineville, Alabama to M.V. Young, Sr. and Ruth German Young. In 1941, his family moved to Piedmont, Alabama where... View Obituary & Service Information

The family of Millard Vernon Young Jr. created this Life Tributes page to make it easy to share your memories.

Millard V. Young, Jr. passed away at his home on the afternoon...

Send flowers to the Young family.