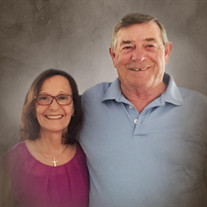 Mr. Michael Wayne Estes, age 72 of Cedartown Georgia, passed away January 18, 2021. He was born and raised in Piedmont, Alabama. Mike proudly joined the Navy in 1965 where he learned the trade of welding in the Seabees Construction Battalion and served four years of active duty, including a tour of Vietnam and service on the U.S.S. Princeton. When stationed in California in the spring of 1969, he met the love of his life Odete Parucci in Los Angeles. It was love at first sight when they met on the corner of Sunset Blvd. and Coronado Street on a blind date that had been arranged by their aunts. That July, they were married and soon moved to Atlanta where he worked construction jobs in the growing city. Many of his years were spent at dizzying heights, welding the framework of many of the buildings still there. However, anyone who knew him knows that he was happiest away from the city, and they soon moved to Rockmart. Mike and Odete welcomed their first daughter Cristine in 1973 then Lori in 1976. One of Mike’s strengths was taking care of others, and he was a proud and protective husband and father. He made sure that his three girls all knew how to drive a straight shift, had nice jewelry, a full tank of gas, and all they needed to conquer the world. He and Odete kept a welcoming, loving home complete with finishing touches that he built himself: a granite fireplace, wood decks, screened porch, garage, work building, and--the most special of all--a playhouse for the girls. He spent several weekends in service with the Navy Reserves for many years. After years of ironworking in the city, Mike worked closer to home in Cartersville and Marietta, lending his expertise to the rail car and conveyor industries before retiring. In 2004, Mike and Odete settled in Cedartown. He enjoyed retirement, greeting Odete with a fresh cup of coffee everyday when she came home from teaching. They put a lot of work into the yard, yielding a beautiful backdrop for long hours of enjoyment chasing grandchildren and occasionally their cats. If you came to visit and the weather was nice, he was likely to be on the patio, sipping coffee and listening to the radio or napping with a carefully balanced toothpick on the edge of his lip. Mike was a proud grandfather, slipping easily into the role of “Papa” for his four grandchildren and “Papa Mike” for many other friends. He chose his friends wisely, and if you were in his circle, you could count on him for anything you needed--anytime and any place. He was most comfortable at home with his cat Fred, wearing a plain white t-shirt and sharing stories with friends and family to make us all laugh. While he didn’t appreciate computers, he found a fast friend in Alexa and challenged her to play his favorite oldies. He will be fondly remembered and greatly missed. He was preceded in death by his loving wife of 47 years, Odete Estes, father J.T Estes, and sister Diane. Survivors include his daughters: Cristine Schulz (Tom) and Lori Smith (Norman); grandchildren: Anna-Lauren Smith, Natalie Schulz, Julia Schulz, and Sam Smith; sisters: Joyce Bostick and Brenda Estes, and many nieces, nephews, and cousins. Graveside funeral services for Mr. Estes will be held Wednesday, January 20, 2021 at 12:00 noon (EST) in Northview Cemetery with Rev. Mike Broome officiating and his daughters delivering the eulogy. The United States Navy Honor Guard will render Military Rites. Pallbearers: Daniel Barber, Kenny Burns, C.L. Carter Jr., Brownie Gaulding, Mitchell Jackson, Danny Sides, Jerome Wilson, and Ken Woods Honorary Pallbearers: Billy Fagan, David Gurley, Rodolfo Medeiros, Vern Miller, Adriano Parucce, and Jack Prewett Smith & Miller Funeral Home is honored to serve the family of Mr. Michael "Mike" Wayne Estes.

Mr. Michael Wayne Estes, age 72 of Cedartown Georgia, passed away January 18, 2021. He was born and raised in Piedmont, Alabama. Mike proudly joined the Navy in 1965 where he learned the trade of welding in the Seabees Construction Battalion... View Obituary & Service Information

The family of Michael "Mike" Wayne Estes created this Life Tributes page to make it easy to share your memories.

Send flowers to the Estes family.