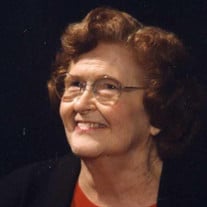 Lelia Mae Rankin Brown, 99, of Piedmont, passed away at Piedmont Health Care Center on May 31, 2020. Mrs. Brown is survived by her daughter, Ranae Coheley and her husband Jimmie of Piedmont, her son, Galen Brown and his wife Lizabeth Talbott of New Orleans, her grandsons Barrett Coheley of Anniston, Daniel Coheley of Piedmont, and her sister-in-law, Kay Brown of Anniston. She is also survived by numerous nieces and nephews. Mrs. Brown was the youngest child of Lela Parker and John Patterson Rankin. In addition to her parents she was preceded in death by her husband, Ernest G. Brown, her sisters Cordie Estes, Lillian Doyal, Maude Anthony, Velia Upton, Vera Webb and Loretta Bishop, brothers Olian Rankin, Melvin Rankin and Lother Rankin. Mrs. Brown was a 1939 graduate of Jacksonville High School. After graduating from JHS, she was hired at the cotton mill in Piedmont to play basketball on the women’s team with three of her sisters who were already on the team. As a homemaker, she was actively involved in her children’s activities, serving as homeroom mother, working with scouts, and serving as a band parent. She also was an excellent seamstress and made all of her and her daughter’s clothes including evening dresses and majorette uniforms. Always an avid reader, Mrs. Brown helped establish Piedmont Public Library and was employed as one of their first librarians for several years. She realized the importance of reading and strived to ensure that the citizens and students of Piedmont had an excellent library for reading enjoyment as well as performing research. In addition to starting the library, Mrs. Brown was involved in multiple civic organizations including the American Legion Auxiliary, the Eastern Star, the Piedmont Garden Club, the Town & Country Garden Club, the Eight and Forty Club and the Red Hat Society. She and her husband developed the first shopping center in Piedmont, Piedmont Plaza, which they owned for many years. She was also a member of the First Baptist Church of Piedmont. After retirement, she and her husband traveled extensively to most of the 50 states including Alaska and Hawaii, to 13 foreign countries including England, France, Germany, Switzerland, Holland, Austria, Greece, Turkey, Canada, and Mexico and also to several Caribbean islands. Funeral service for Mrs. Brown will be private. Gentlemen serving as pallbearers are Michael Clarkson, James Gray, David Suther, Michael Livingston, Bobby Glover and Dennis Ragsdale. Honorary pallbearers are staff and caregivers at Piedmont Health Care Center and Legacy Village. In lieu of flowers the family suggest memorial contributions to the Piedmont Public Library, 106 North Main Street, Piedmont, AL 36272. Thompson Funeral Home is in charge of arrangements.

Lelia Mae Rankin Brown, 99, of Piedmont, passed away at Piedmont Health Care Center on May 31, 2020. Mrs. Brown is survived by her daughter, Ranae Coheley and her husband Jimmie of Piedmont, her son, Galen Brown and his wife Lizabeth Talbott... View Obituary & Service Information

The family of Lelia Mae Rankin Brown created this Life Tributes page to make it easy to share your memories.

Lelia Mae Rankin Brown, 99, of Piedmont, passed away at Piedmont...

Send flowers to the Brown family.