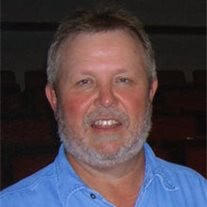 Funeral services for Larry Joe Barnwell, 55, of Piedmont will be Sunday at 2:00 p.m. at Asberry Baptist Church with the Rev. William Cain, Mr. Leon McFall and Mr. Bill Roberts officiating. Burial will follow at Jacksonville City Cemetery. The body will lie in state at the church one hour prior to services. The family will receive friends Saturday from 6-8 p.m. at Asberry Baptist Church. Mr. Barnwell passed away Friday, November 9, 2012 at his home. He is survived by his loving wife of 32 years, Charlotte Barnwell of Piedmont; two daughters, Amber Parris (Lee) and Amy Creel (Stacy) all of Piedmont; three grandchildren, Charlee Ann Parris, Judson Parris and Grey Creel; his father, Carl Ray Barnwell of Jacksonville; and a sister, Adelia Barnwell of Jacksonville. Pallbearers will be Nunnally Williams, Johnny Ingram, Mitchell Bragg, Arlen Geier, Bobby McFall, Mark Roberts, Leon McFall and Danny McGinnis. Mr. Barnwell was a Jacksonville native and was a Piedmont resident. He attended Asberry Baptist Church and was retired from the City of Jacksonville. He loved the outdoors, hunting and fishing and was a loving husband, father, grandfather and father-in-law. He was preceded in death by his mother, Lonette Barnwell; and a grandson, Eli Parris.

The family of Larry Joe Barnwell created this Life Tributes page to make it easy to share your memories.

Funeral services for Larry Joe Barnwell, 55, of Piedmont will...

Send flowers to the Barnwell family.