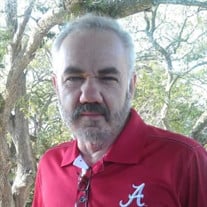 Keith Douglas Coppock, 61, passed away peacefully Saturday, July 03, 2021, at home surrounded by his loving family. Keith was born in Carrollton, Georgia but was raised in Anniston, Alabama, where he became a lifelong resident. Keith was a graduate of the 1978 class of Saks High School and later retired as a supervisor for Calhoun County. In the last few years, he started selling plastic barrels and became known as the “Barrel Man.” Keith always had an outgoing personality and made you feel at ease, never meeting a stranger. He was fun to be around and every day was an adventure. He was an avid Alabama fan and loved to watch NASCAR. As much as he loved being a friend to so many, he loved his family even more. From being a loving husband and daddy, he loved being a Pawpaw to his grandkids and being a best friend to his brother. Keith was preceded in death by an infant daughter, Payton-Marie Coppock and his parents, Doug and Gail Coppock. He is survived by his wife, Kristy Coppock of Ohatchee; one daughter, Christi Ford (Jeremy) of Alexandria; one son, Daniel Coppock (Amy) of Birmingham; step-daughter, Donna Hughes of Ohatchee; step-son, Dean McKay of Ohatchee; four grandchildren, Christian Ford, Aubree Ford, Cross Coppock, and Grace Coppock; one sister, Kimberly McDowell (Brian) of Anniston; and one brother, Kirt Coppock (Tammy) of Anniston; several nieces and nephews; and his fur babies, Max and Molly. Keith stood firm in his salvation and belief in his heavenly Father. That faith gave him the strength needed during his last days. Per his wishes, Keith was cremated and there will be a private service at a later date. The family would like to express our gratitude to the whole team at Vanderbilt-Ingram Cancer Center and a special heartfelt thank you to Dr. Gibson for the wonderful care given to our loved one. In lieu of flowers, please consider donating in honor of Keith to further cancer research at https://www.vicc.org/giving

Keith Douglas Coppock, 61, passed away peacefully Saturday, July 03, 2021, at home surrounded by his loving family. Keith was born in Carrollton, Georgia but was raised in Anniston, Alabama, where he became a lifelong resident. Keith was a graduate... View Obituary & Service Information

The family of Keith Douglas Coppock created this Life Tributes page to make it easy to share your memories.

Send flowers to the Coppock family.