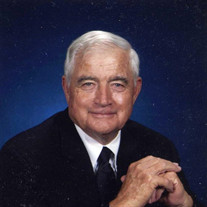 Funeral service for James Kelly Bennett, 83, of Gadsden will be Saturday, August 08, 2020, at 12:00 p.m. at Thompson Funeral Home with the Rev. Mike Spivey officiating. Private burial will follow at Highland Cemetery. The family will receive friends at the funeral home one hour prior to the service. Mr. Bennett passed away Thursday, August 06, 2020 at Gadsden Regional Medical Center. Survivors include his wife of 64 years, Barbara Hicks Bennett of Gadsden; four children, Beth Bennett of Tampa, FL, Maury Jim Bennett Miller (David) of Alexander City, James Cory Bennett (Pam) of Chelsea, and Barry Marlin Bennett of Valdosta, GA; three grandchildren, Brooke Pontenberg, Alexis Lee Bennett and Lauren Kelly Bennett; one sister, Ann Marlyn Bennett Sawyer of Fort Payne; and several nieces and nephews. Pallbearers will be James Cory Bennett, Barry Marlin Bennett, Chuck Sawyer, Greg Hicks, David Miller, and Dorman Robinson. Mr. Bennett was a native and resident of Piedmont most of his life and most recently resided in Gadsden. He was a graduate of Piedmont High School and Alabama Polytechnic Institute now known as Auburn University. He was the former owner of Bennett - Knight Furniture Company. Mr. Bennett was a former member of Piedmont City School Board, where he served as chairman during construction of the new Piedmont High School. He was a member of Zamorah Shrine Temple and had served as president of the Hollow Stump Hawgers. He was a former member of the Piedmont Jaycees, a member of the Gadsden First United Methodist Church Choir, President of the church organization, Retired and Ready, a member of the Gadsden Kiwanis Club, and a member of the Alabama Master Gardeners. Mr. Bennett enjoyed hunting and fishing and was a private pilot. He was preceded in death by his parents, J.M. and Eunice Bennett and Pearlie Cowser Smith. Memorial contributions may be made to the First United Methodist Church of Piedmont, 300 Main Street Piedmont, AL 36272, The First United Methodist Church of Gadsden, 115 South 5th Street, Gadsden, AL, or a favorite charity.

Funeral service for James Kelly Bennett, 83, of Gadsden will be Saturday, August 08, 2020, at 12:00 p.m. at Thompson Funeral Home with the Rev. Mike Spivey officiating. Private burial will follow at Highland Cemetery. The family will receive... View Obituary & Service Information

The family of James Kelly Bennett created this Life Tributes page to make it easy to share your memories.

Funeral service for James Kelly Bennett, 83, of Gadsden will...

Send flowers to the Bennett family.