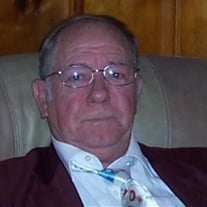 Funeral service for Rev. H.T. “Tommy” Ballew, 75, of Piedmont will be Thursday, October 28, 2021 at 7:00 p.m. at Thompson Funeral Home. The family will receive friends Thursday evening from 5:00 p.m. until time of service. Burial will be Friday, October 29, 2021 at 10:00 a.m. at Mt. Olive First Congregation Methodist Church Cemetery. Mr. Ballew passed away Monday, October 25, 2021 at Jacksonville Health and Rehab Center. Survivors include his loving wife of 56 years, JoAnn Ballew of Piedmont; one daughter, Joyce Monsma of Florida; two sons, Thomas Ballew of Piedmont and Kenny Ballew (Tamatha) of Rome, GA; seven grandchildren, Myrandah Shutt (Corey), Dylan Ballew, Derrek Monsma, Ashley Ballew, Tyler Ballew, Kailey Ballew, and Rachel Ballew; four great grandchildren; two sisters, Elsie Parris (James) of Piedmont and Mary Ward of Spring Garden; one brother, Larry Ballew (Lisa) of Piedmont; and fur babies, Peanut, Sadie, and Squeaky. Pallbearers will be family and friends. Mr. Ballew was a lifelong resident of Piedmont and was a graduate of Piedmont High School Class of 1964. He pastored for many years throughout Etowah and Calhoun Counties and was of the Baptist faith. He had served on the Board at Piedmont Benevolence Center and enjoyed visiting there every chance he got. He was an avid Piedmont Bulldogs fan and had a passion for serving and ministering to people. Mr. Ballew was a devoted and loving husband, father, grandfather, brother, and friend. He was preceded in death by one son, Eddie Ballew; parents, Preston and Jewell Ballew; one brother, Nathaniel Ballew; sisters, Ophelia Little and Shirley Gouger.

The family of Rev. H.T. "Tommy" Ballew created this Life Tributes page to make it easy to share your memories.

Send flowers to the Ballew family.