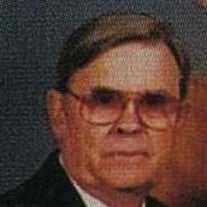 Funeral service for George Hershel Mallows, 94, of Piedmont will be Tuesday, February 25, 2020 at 2:00 p.m. at Thompson Funeral Home with Dr. Kevin Payne officiating. Burial with military honors will follow at Piedmont Memory Gardens. The family will receive friends at the funeral home Tuesday from 12 – 2 p.m. Mr. Mallows passed away Saturday, February 22, 2020 in Huntsville. Survivors include two children, Philip Mallows (Susan) of Anniston and Phyllis Mitchell of Pleasant Gap; six grandchildren, Dana Poole (Brian), Cindy Wilson (Jay), Elisabeth Kirkbride (Chris), James Mallows (Kati), Carly Miller (Andrew) and Avie Mallows; 13 great grandchildren; four great great grandchildren; one sister, Mary Holbrook of Piedmont; and several nieces and nephews. Pallbearers will be James Mallows, Andrew Miller, Brian Poole, Ryan Poole, Kenny Holbrook and Mike Rutherford. Mr. Mallows was a longtime resident of Piedmont. He was a member of the Piedmont First United Methodist Church where he had been active with the Methodist Men. He was a United States Navy WWII veteran and enjoyed reminiscing about his days in the service during the war. Mr. Mallows was employed by the John Deere dealership in Piedmont and Centre until his retirement. After retirement he worked with the City of Piedmont. He was a member of the Lozahatchee Masonic Lodge #97 F&AM and was the recipient of the 50 year membership pin. Mr. Mallows was known as “Papa” and enjoyed his grandchildren and attending their ballgames. He was preceded in death by his loving wife of 72 years, Margaret Arah Mallows; son-in-law, Daniel Mitchell; grandsons, Daniel Mallows and Michael Wolfe; and a great grandchild, Lane Jones. Flowers will be accepted or memorial contributions may be made to the Piedmont Rescue Squad, PO Box 333, Piedmont, AL 36272.

The family of George Hershel Mallows created this Life Tributes page to make it easy to share your memories.

Funeral service for George Hershel Mallows, 94, of Piedmont will...

Send flowers to the Mallows family.