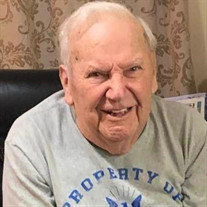 Funeral service for Gary Stanford ”Babe” Hincy ,87, of Piedmont will be Friday, February 11, 2022 at 3:00 p.m. at Thompson Funeral Home with Mr. Gary McCurdy and Brian Jennings officiating. Burial will follow at Highland Cemetery. The family will receive friends at the funeral home Friday from 1:30 p.m. until time of services. Mr. Hincy passed away Monday, February 7, 2022 at his home. Survivors include three daughters, Stephanie Ritter (William) of Cedartown, Georgia, Allison Mobley and Crystal Cain (Tracy) all of Piedmont; 1 daughter-in-law: Tammie Hincy of Piedmont; 12 grandchildren, Yolanda Williams, B. J. Ritter, Marshall Ritter, Caleb Ritter, Ethan Ritter, Dustin Mobley, Whitney Hammett, Olivia Colvard, Heather Matalka, Hilarie Rankin, Andru Hincy and Devin Hincy; 21 great-grandchildren; 1 sister, Brenda Minter (Troy) of Piedmont; two chosen brothers, Jim Simmons and David Simmons. Pallbearers will be Ethan Ritter, Caleb Ritter, Dustin Mobley, Andru Hincy, Devin Hincy, Jason Hammett, Josh Colvard, Scott Minter and Chad Minter. Honorary pallbearers will be Kim Cunningham, Vince Cottrell, Ray Glover, J.E. Law, Larry Webb, Luay Matalka and Keith “Skeet” Payne. Babe was a longtime resident of Piedmont and was a member of the First Baptist Church. He attended Piedmont High School and continued his education at Gadsden State. He honorably served his country in the United States Navy during the Korean War and was stationed in Hong Kong for a portion of his enlistment. He was a great athlete and played football and basketball while in school. He was blessed to marry the love of his life, Linda Yvonne Christian Hincy. He gave everyone a nickname and if he had trouble remembering your name he called you” Babe”, and that’s where his nickname originated. He loved his community, his friends and Alabama Football and was an avid Trump Supporter. He loved his family with all his heart and soul and if you met him, you loved him. Babe was founder and President of the “Liars Club” at the Civic Center. He could tell amazing stories and jokes. He retired from Springs Industries and was a former employee of Bostrom Seating. Babe was preceded in death by his loving wife of 62 years, Linda Yvonne Hincy; three sons, Stan Hincy, Jubal Hincy, and Kevin Hincy; son-in-law, Clint Mobley and his parents, Buford and Gladys Hincy. The family would like to extend a special “Thank You” to the Piedmont Rescue Squad and to the Piedmont Police Department.

The family of Gary Stanford "Babe" Hincy created this Life Tributes page to make it easy to share your memories.

Send flowers to the Hincy family.