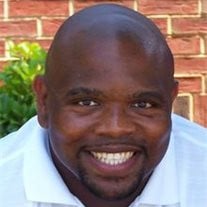 Funeral services for Frederic Lajohn "Coach T" Taylor, I, age 33, of Piedmont, will be Wednesday, October 31, 2012 at 7 p.m. at Thompson Funeral Home with the Rev. Charlie Parker officiating. Burial will be Friday at Shady Grove Baptist Church Cemetery in Petal, Mississippi. The family will receive friends Wednesday from 4-7 p.m. at the funeral home. Coach Taylor passed away Sunday, October 28, 2012 at Jacksonville Medical Center. Survivors include his wife, Ammie Pike Taylor; children, Kylie Jade Taylor, Kambria Addison Taylor, Frederic Lajohn Taylor II, and Bryant O'Neal Lajohn Taylor; his parents, Jeff and Jeanne Karns; sisters, Sherita Taylor, Sachular Thompson, Latish Hill, LuCina Taylor and Jessica Karns; brothers, Chris Karns, Brian Karns and James Karns; and special nephews, Travis Millsap and Kameron Taylor. Coach Taylor was a Mississippi native and had been a resident of Calhoun County, Alabama since 1998. He was a graduate of South Jones Jr./Sr. High School in Ellisville, Mississippi and was a 2003 graduate of Jacksonville State University where he played football. He had served on the coaching staff at Piedmont High School and Cherokee County High School. Coaching was his life and his children, his players and his students were all very important to him and were all loved by him. He was preceded in death by his parents, John Wesley and Sachular Bess Taylor. The family request no flowers.

The family of Frederic Lajohn "Coach T" Taylor, I created this Life Tributes page to make it easy to share your memories.