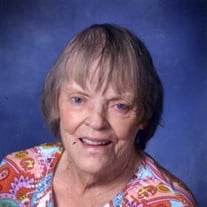 Services for Frances “Gabby” Morgan Conn, age 84, of Nances Creek will be Monday, November 01, 2021 at 1:00 p.m. at Thompson Funeral Home with the Rev. Byrian Watts officiating. Burial will follow at Nances Creek Cemetery. The family will receive friends at the funeral home one hour prior to the service. Mrs. Conn passed away peacefully at home on October 29th, 2021 after a short battle with metastatic breast cancer. She was born July 11th, 1937 in Huntsville, Alabama to John and Edna Morgan. Frances was a longtime resident of Calhoun County and lived in the Nances Creek community for almost 40 years. Mrs. Conn was a graduate of Oxford High School and worked as a bookkeeper earlier in life. She married her sweetheart, Kenneth H. Conn, in 1960 and they were married for 54 years. He preceded her in death in 2014. She was also a faithful military spouse, living in several different states, to include being stationed in Alaska. Despite her different jobs and travel, she always said that the greatest job she ever had was being a mother. Mrs. Conn enjoyed spending time on the farm with her son and daughter-in-law, grandchildren, and her beloved dog Lucy Lou. She also loved reading, especially mystery novels, and was an expert at Candy Crush. She was a faithful member of Grace Tabernacle Church and always tried to watch the church service online after she became unable to attend in-person. She is survived by her son, Elisha “Eli” Conn (Penny); grandchildren, Laney Conn, Maddyn Conn, and Sawyer Conn; sister Dovie Heaton Bergin; several nieces and nephews, and special nephew Roger Wingard. Pallbearers will be Justin Amberson, Clint Cheatwood, Lamar Conn, Joe Crosby, Keith Penny, and Roger Wingard. Honorary Pallbearers will be Members of Grace Tabernacle Church. She was preceded in death by her husband of 54 years, Kenneth H. Conn; parents, Edna and John Morgan; sisters, Marie Wingard, Jean Wingard, Gayle Whitlock Loennig; brothers, Buddy Morgan, Franklin Morgan, J.T. Morgan, Jr., David Morgan; special Aunt, Dovie Arnold. The family would like to thank Comfort Care Hospice for their services during Mrs. Conn’s illness. The family would also like to extend their love to a special angel, Glenda Williamson, for her love, support, and friendship during Mrs. Conn’s illness. In lieu of flowers, memorial contributions may be made to St. Jude’s Children’s Research Hospital, 501 St, Jude Place, Memphis, TN 38105-1905.

The family of Frances "Gabby" Morgan Conn created this Life Tributes page to make it easy to share your memories.

Send flowers to the Conn family.