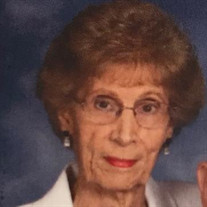 Funeral service for Eleanor Dean Kirkpatrick, 88, of Piedmont will be Wednesday, September 25, 2019 at 11:00 a.m. at the First United Methodist Church of Piedmont with Dr. Kevin Payne and the Rev. Mike Spivey officiating. Burial will follow... View Obituary & Service Information

The family of Eleanor Dean Kirkpatrick created this Life Tributes page to make it easy to share your memories.

Send flowers to the Kirkpatrick family.