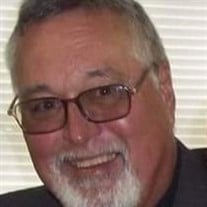 Funeral service for Donny Stewart Butler, 69, of Piedmont will be Tuesday, January 11, 2022 at 2:00 p.m. at Thompson Funeral Home with the Rev. Todd Martin, the Rev. Eric Arrington and Bro. Jerry Pike officiating. Burial will follow at Youngs Chapel Cemetery. The family will receive friends Monday evening from 6:00 -8:00 p.m. at the funeral home. Donny passed away Friday, January 07, 2022 at his home. Survivors include his loving wife of 10 years, Angie Bonds Butler of Piedmont; five daughters, Tara Martin (Todd), Amanda Lundgren (Bryan), LaKisha Bryant (Ashley), Samantha Chapman (Adam), and Ashlie McBrayer (Anthony); five grandchildren, Ashtyn Bryant, Rylie Payten Chapman, Silas Bryant, Kynlie Chapman, and Charleigh Grace; one brother, Faron Butler (Tracy); mother-in-law: Sandra Bonds; father-in-law, Charles Bonds; and several nieces and nephews. Donny was preceded in death by his father, Eulice Butler; mother, Dorothy Stewart Butler Pope and a brother, Billy “Preacher” Butler. Pallbearers will be Todd Martin, Adam Chapman, Ashley Bryant, Bryan Lundgren, Anthony Rocco, and Doug Miller. Honorary Pallbearers will be Danny Cole, Phillip Pruitt, Brad Dean, Ricky Freeman, Mo Spears and members of the Latter Reign Quartet. Donny was a loving husband, dad, paw paw, brother, friend and daddy to his “Nina girl”. He thought family meant everything. If you knew him, you loved him, and his kind soul. Afterward, you were family. He loved his Lord and traveled many years singing and praising him with The Butler Family, Union Heirs, Latter Reign Quartet, Interstate Quartet, and this list goes on. He always said “I don’t regret a mile I traveled for my Lord” and “when I’m done, I’ll be singing in Glory”. Donny was a lifelong resident of Piedmont and a graduate of Piedmont High School Class of 1970. He worked in a professional trade as a Master Tool and Dye Maker for many years before his retirement. He owned and operated Butler’s Guide Service for 52 years, where he became well known on many of the surrounding lakes as one of the most experienced guides. Recently his passion had been rekindled for his Smoked BBQ. He and his wife (Angie Butler) custom built a smoke BBQ trailer, “Skillet’s BBQ”, which made his dream come true and him extremely happy. Last but not least he was a true to the core Alabama Roll Tide fan. He lived for his Alabama Football and to yell “Roll Tide”!!!

The family of Donny Stewart Butler created this Life Tributes page to make it easy to share your memories.

Funeral service for Donny Stewart Butler, 69, of Piedmont will...

Send flowers to the Butler family.