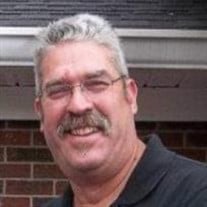 David Levelle Loy, born February 16, 1957 in Grand Forks, ND left us peacefully from his home on the morning of February 11, 2022. David was raised in South Saint Paul, MN. He proudly served in the U.S. Navy for three years. While stationed in Norfolk, VA he met and married his best friend, Trudy Joyce, together they shared 40 wonderful years of marriage. They moved to Rock Run Station, Alabama in the early 80’s. He was very talented in many areas specializing in maintenance engineering. The past nine years he was employed by AIDA-America. He enjoyed antiquing and restoring old homes and furniture while spending quality time with family and friends. Anyone who ever spent time with David recognized his sense of humor, love of motorcycles, and knowledge of old music. David will be missed by many family, friends, and coworkers. David is survived by his wife, Trudy Joyce Loy; son, Paul “PJ” Loy (Crystal); daughter, Allyce “Ally” Morrison (Destin); his brother, Darrell Loy (Pam); sisters, Kathy Herbes (Don) and Kim Gudim (Jerry); and numerous nieces, nephews, and cousins. David was preceded in death by his parents, Levelle and Alta Loy; brother, Dale Loy; and father and mother-in-law, Paul and T Joyce. Funeral services will be held at Thompson Funeral Home on Saturday, February 19, 2022 with Alan Head and Gary McCurdy officiating. The family will receive friends for visitation from 11-1 and the funeral will start at 1. There will not be a graveside service. The family would like to thank Calhoun and Etowah County Amedysis and Piedmont Family Practice. Honorary pallbearers will be Butch Williamon, Ray Cordle, Steve Beavers, Stan Anderson, Alvin Crabb, and Mark Whittington. In lieu of flowers, the family requests donations to Venecia’s Foundation, 108 N Center Ave, Piedmont, AL 36272.

David Levelle Loy, born February 16, 1957 in Grand Forks, ND left us peacefully from his home on the morning of February 11, 2022. David was raised in South Saint Paul, MN. He proudly served in the U.S. Navy for three years. While stationed... View Obituary & Service Information

The family of David Levelle Loy created this Life Tributes page to make it easy to share your memories.

Send flowers to the Loy family.