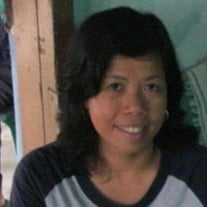 Memorial service for Concepcion “Connie” Martin, 53, of Piedmont will be Friday, February 11, 2022 at 11:00 A.M. at Thompson Funeral Home. The family will receive friends Friday one hour prior to services. Mrs. Martin passed away Saturday, February 05, 2022 at Piedmont Health Care Center. Survivors include her daughter, Esther Martin; sibling, Alicia, Andres, Perpetua, Renedios, Noli, Roque, and John from the Philippines; sister-in-law, Mary Bramlett of Piedmont; and nephews, Horace Bramlett and Frankie Bramlett both of Piedmont. Connie was a native of Angeles, Philippines and earned her Master’s degree from Pampanga State Agricultural University in Magalang, Philippines. She was 33 years old when she came to America and becoming a United States citizen was very honorable to her. She received her second Master’s in Science at Perdue University Global in Texas. She taught many years at Cherokee Elementary School in Cedartown, Georgia, where she received the Excellent Educator Award in 2014. She took great pride in teaching, making sure her students had what they needed. She learned to speak Spanish to better communicate with them. She had been a resident of Piedmont since 2004. She loved her family and was a wonderful loving mother to Esther. Connie was preceded in death by her husband, Robert Keith Martin and her parents, Rusino and Fausta Trinidad. The family would like to extend a special “Thank You” to the Piedmont Health Care staff, Freda Fagan, and Dr. Ulrich for the love and care given to Connie. The Piedmont City School System, staff and administration, and Cherokee Elementary School in Cedartown, Georgia for always being supportive to the family, and to Mark Harper and others for the continued love and support. In Lieu of flowers, memorial contributions may be made to the Drama Department at Piedmont High School.

Memorial service for Concepcion &#8220;Connie&#8221; Martin, 53, of Piedmont will be Friday, February 11, 2022 at 11:00 A.M. at Thompson Funeral Home. The family will receive friends Friday one hour prior to services. Mrs. Martin passed away... View Obituary & Service Information

The family of Concepcion "Connie" Martin created this Life Tributes page to make it easy to share your memories.

Send flowers to the Martin family.