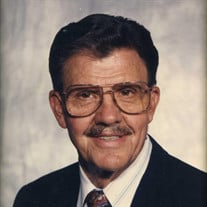 Funeral service for Charles Bullock, 92, of Piedmont will be Saturday, March 20, 2021 at 2:00 p.m. at Thompson Funeral Home with Ryan Smith officiating. Burial will follow at Shady Grove Methodist Church Cemetery. The family will receive friends at the funeral home one hour prior to the service. Mr. Bullock passed away Tuesday, March 16, 2021 at Gadsden RMC. Survivors include his wife, Shirley Sanford Bullock; one brother-in-law, Ray Sanford (Brenda) of Hokes Bluff; three sisters-in-law, Patricia Peace of Brewton, Diana Sanford of Piedmont, and Frankie Sanford of Piedmont; and one niece, Terry Morgan (Steven) of Georgia. Pallbearers will be Jeff Shields, Jason Shields, Jay Shields, Ryan Smith, Colby Smith, and David Benefield. Mr. Bullock was a longtime resident of Piedmont and attended Shady Grove Methodist Church. He was a member of the Shriners of Georgia and was a member of the Georgia National Guard, where he served as a medic. He enjoyed visiting and singing at Piedmont Nursing Home, Jacksonville Nursing Home, and the Senior Citizen Center. Mr. Bullock was preceded in death by one son, Kevin Bullock; and one sister. Flowers may be sent or memorial contributions may be made to Piedmont Rescue Squad, P.O. Box 333, Piedmont, AL 36272 or to a favorite charity.

The family of Charles Bullock created this Life Tributes page to make it easy to share your memories.

Funeral service for Charles Bullock, 92, of Piedmont will be...

Send flowers to the Bullock family.