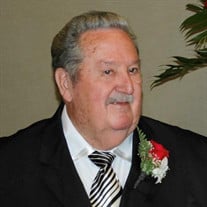 Mr. Cecil Eugene “Gene” Curtis , 85, of Piedmont passed away peacefully at his home on Wednesday, May 6, 2020 surrounded by his family. Mr. Curtis, lovingly known to everyone as “Pop”, had been a resident of Piedmont for the past 46 years. He retired as a foreman at Kaiser Aluminum. He had also worked in construction and was a master carpenter. He was a great baseball coach, had a great sense of humor and was very mischievous. He was a man that walked with his head in the clouds and his feet firmly on the ground. Pop was preceded in death by his loving wife of 67 1/2 years, Doris J. Curtis; two sons, Wayne Curtis and Johnnie Curtis; granddaughter, Rebecca Curtis; great- granddaughter, Emma Jakiel and his siblings, Dorothy Gowan, Billy Curtis, Frances Coheley, and Shirley Curtis. Survivors include one son, Gary Curtis (Connie) of Piedmont; one daughter, Tonya Wallace (Jeremy) of Birmingham, three grandchildren, Crystal Preston (Kelly), Candace Jakiel and Jacob Curtis (Kinsie) and many other grandchildren and great-grandchildren, nieces and nephews. Graveside services for Mr. Curtis will be private. Pallbearers will be Gary Curtis, Kelly Preston, Jacob Curtis, Jeremy Wallace, Gavin Wallace and Phillip New. Honorary pallbearers will be Paul Byers, David Wallace, Levi Jakiel, Titus Jakiel, Ricky John Holbrooks, and Jeff Bodine Holbrooks. The family request no flowers. Memorial contributions may be made to St. Jude Children’s Research Hospital, 501 St. Jude Place, Memphis, TN 38105-1905 or to St. Joseph’s Indian School P.O. Box 326 Chamberlain, SD 57326.

The family of Cecil Eugene "Gene" Curtis created this Life Tributes page to make it easy to share your memories.

Send flowers to the Curtis family.