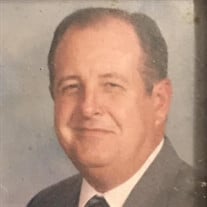 Memorial service for Bobby Ed Ward, 86, of Anniston will be Thursday, September 02, 2021 at 3:00 p.m. at Chosea Springs Baptist Church, 4066 AL Highway 9, Anniston, AL 36207, with Dr. Tony McCain, Dr. Alan Jinks, the Rev. Rodney Rutherford and grandson, Brian Ward officiating. The family will receive friends at the church one hour prior to the service. Burial will follow in the adjoining cemetery. Mr. Ward passed away Saturday, August 28, 2021 at his home. Survivors include one son, Wendell Ward (Donna) of Anniston; one daughter, Teresa Ward of Anniston; three grandchildren, Brian Ward (Heather), Amanda Ward Beason (Matt), and Lindsey Strader (Kris); three great granddaughters, Kaley Beason, Emma Beason, and Savannah Beason; and one great grandson, Ollis Stocks. Honorary pallbearers will be Active, Retired, and Reserve Alabama State Troopers. Mr. Ward was a charter member of Chosea Springs Baptist Church, where he was an active member, serving as the Chairman of Deacons, the Secretary, and the Treasurer. He was a former Alabama State Trooper with many years of service and started his law enforcement career with Oxford Police Department. He was a charter member and former officer at Quad Cities Volunteer Fire Department. Mr. Ward was a U.S. Army Veteran, where he served during the Korean War and served in Germany and Panama. He Retired from the Alabama National Guard as a First Sergeant with a total of 42 years of distinguished military service. He loved working in his vegetable garden, working in his yard, tending to his blueberry bushes, and fishing. He enjoyed giving the vegetables away to his family and friends. He adored his grandchildren, great-grandchildren and church family. Mr. Ward was preceded in death by his wife, Beverly Jordan Ward; daughter, Debora “Debbie” McCurdy; parents, B.A. Ward, Sr. and Cora Willamon Ward; sister, Linda Ward; and brother, B.A. Ward, Jr. The family request for those in attendance at the memorial service to please wear a face mask. The family would like to extend our sincere thanks to Encompass Healthcare and Hospice and to caregivers, Carol and Lori. Floral arrangements will be accepted at the church beginning at 1:00 PM or donations may be made to the American Cancer Society. Thompson Funeral Home in charge of arrangements.

The family of Bobby Ed Ward created this Life Tributes page to make it easy to share your memories.

Memorial service for Bobby Ed Ward, 86, of Anniston will be Thursday,...

Send flowers to the Ward family.