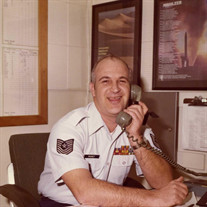 Archie Lee Rainey, 75, of Piedmont passed away Friday, May 15, 2020 at his home. Survivors include his loving wife of 52 years, Sarah P. Rainey; two daughters, Sonya Rainey and Deborah Blount (Kenneth) all of Piedmont; four grandchildren, Christopher Blount (Abby), Autumn Kennedy, Madeline Rainey, and Katelyn Lawler; one great grandchild, Aria Kennedy; one sister, Gaynell Morgan of Piedmont; one brother, Jerry Rainey (Ann) of Piedmont; and several nieces, nephews, and fur babies. Mr. Rainey was a longtime resident of Piedmont. As a young boy he worked at the Allison Theatre. He joined the United States Air Force , where he retired with over 20 years of service. After returning back to Piedmont , he retired from Springs Industries, and was a former employee of H&R Block . Mr. Rainey loved spending time with his family, especially his grandchildren. He was an avid Alabama football fan. He was preceded in death by his parents, Willis and Venice Rainey. In lieu of flowers, the family suggest memorial contributions be made to the Piedmont Rescue Squad, P.O. Box 333, Piedmont, AL 36272.

The family of Archie Lee Rainey created this Life Tributes page to make it easy to share your memories.

Send flowers to the Rainey family.